June 26, 2007
Posted by: Dick Wilson
Start: Dawson City, YT
Destination: Whitehorse, YT
Miles traveled: ~350
The ride from Dawson City to Whitehorse was uneventful except for several sections of chip-sealed roads which were being resurfaced, and due to the rain they were muddy and slick. There was a slight amount of slipping and sliding, but we kept the rubber side down and made it 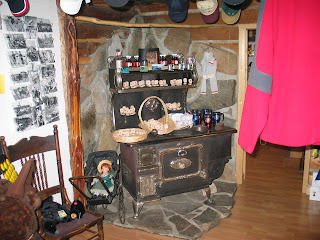 through without any problems. We stopped for a break at the Moose Creek Lodge. This is an old fashioned log structure with a quaint interior. They did their own baking. We ate several delicious raspberry tarts and had a cup of coffee, as the weather was somewhat cool, it had been raining a bit, and we were slightly chilled. We arrived at Whitehorse and found a Bed & Breakfast where Greg and Shannon were hosting us. They are delightful people. It is much more like being a guest in someone’s home than an individual renting a room. Tomorrow will be a day to explore Whitehorse before heading south again.
Posted by Dick Wilson at 11:20 PM